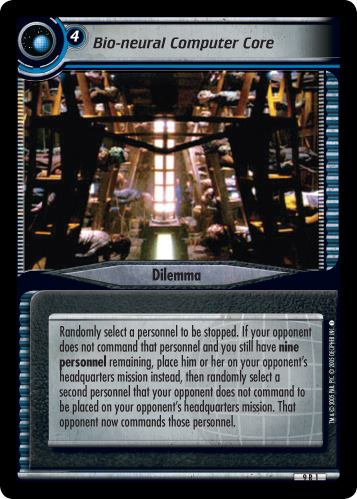 Rule hint for this card

This card has an erratum: Change of wording.

This card has an clarification: That opponent only takes command of the personnel that are placed on his or her headquarters mission. (CRD 2010-05-29)

Card logging info: First edited by at . One quality log by eberlems at Feb 17th, 2019. Please support openCards and validate game text of this card a second time!

Latest 5 Decks with this card (or with a reprint of this card):
- "Megateam Borg" by Avery Matteson
- "Borg Assimilation II" by Alexander Schmitz
- "If you think this has a happy ending, you haven't been paying attention." by Joshua Sheets
- "Philipp Scholz - ECC 2015" by Philipp Scholz
- "Clergyman, on the off chance that this does not go well for me..." by Joshua Sheets
To see all decks with this card click here.
Create your own Deck in the ST2E deck section!

There are 26 entries for Bio-neural Computer Core (ST2E 9 R 1) at the Tradeplace (47 haves and 3 wants). Click here to see all trade list entries for this Rare card!
Also see here for all trade lists with any card fom "Dangerous Missions".